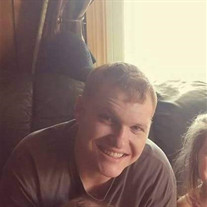 Traver Scott Ryan, age 26, left this world on Tuesday, December 20, 2016 at St Francis Hospital in Tulsa, OK. Traver was born on August 17, 1990 to Travis and Holly (Harris) Ryan in Grove, OK. He grew up and attended school in Fairland, OK, Pagosa Springs, CO and graduated from Jay High School in 2009. Traver followed his passion for mechanics and auto body by attending school to become a certified Auto Collision Repair Tech. For the last 5yrs, he worked as an Industrial Maintenance Mechanic at Dupont in Pryor, OK. Traver was a wonderful brother, uncle and grandson and a devoted father to his 4 children. He could always be counted on for help and advice. Second to his love for his family, was his love for good music and old Chevrolets, which he inherited from his father. When he wasn’t working, which was rare, you could find him with his family, strumming his guitar, riding his motorcycle with friends or working on his ’53 Chevy. There was never dull moment with Traver around. He could light up a room just by entering with his smile. He could make anyone laugh and always wore a smile, even when he was hurting and he was never one to burden others with his problems. Traver’s children, Tierra, Rozlynn, Olivia and Waylon were his world and when he was with them he beamed with joy. He was taken from the world too soon and many hearts are broken from this loss. Traver is survived by his loving family: father, Travis Ryan of Gentry, AR and mother, Holly (Harris) Ryan of Kansas, OK; brothers, Marcus Ryan of Powell, MO, Trenton Ryan of Salina, OK, Tyler Ryan and Tristan Ryan, both of Conroe, TX. Children, Tierra Ryan of Spavinaw, OK, Rozlynn, Olivia and Waylon Ryan and their mother and love of his life, Emily Shuck, all of Jay, OK, great grandmother, Lu Harding of Fairland, OK, grandparents: Steve and Bonnie Ryan of Jay, OK, Janis Balsters of Jacksonville, AR, Doug Tedford, Pam Tedford of Gentry, AR and George & Melba Weaver of Fairland, OK and many loving, aunts, uncles, cousins and nieces and nephews. Visitation for family and friends will be held from 6-8pm Tuesday, December 27 and funeral services will be at 2pm Wednesday, December 28, 2016, both at Nichols Funeral Chapel. Burial at Hickory Grove Cemetery. Donations in Memory of Traver Ryan may be made at www.gofundme.com.

The family of Traver Ryan created this Life Tributes page to make it easy to share your memories.

Send flowers to the Ryan family.