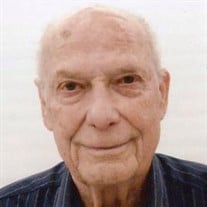 Thomas “Tom” E. Witty, age 95, of Grove passed away on Wednesday, March 31, 2021 at his home. In 1925, on a small family farm a little north of Grove, Oklahoma, a son was born to Curt and May Witty. Having two older sisters, Mary Ruth and Dorothy, young Thomas was at once a first child, a middle child, and the baby of the family. Eventually passing the last designation onto his third sister Dorothy, and then finally to his baby brother Robert. Tom attended Grove public schools, eventually graduating from high school in the spring of 1945, facilitating his immediate induction into the Army. After completing his basic training at Fort Leonard Wood, Missouri. Tom was assigned to the infantry and immediately shipped overseas to join the fighting going on in Normandy, France, and Belgium. While in fighting in Belgium, Tom was among the troops that were caught up in Hitler’s final attempt to push the allied forces out of Germany – the Battle of the Bulge. At its onset, he was caught behind enemy lines and linked up with other scattered soldiers trying to get back to their units. Tom successfully made it back across enemy lines, but others were lost. While serving in Europe, Tom received the EAME Campaign Ribbon with two Bronze Stars, a Good Conduct Medal, the Army Occupation Ribbon (Germany), the Victory Ribbon, and three Overseas Service Bars for his contributions in the war. Tom re-visited the sites in Belgium where he had fought with others to finally destroy the German war effort. In 2012 he was among a few veterans chosen for a flight to Washington DC to visit Arlington National Cemetery. While attending OU on the GI Bill after returning from Germany, Tom met Virginia Ruth King, or Ginny as her friends called her. It wasn’t long until a romance bloomed between the two. On December 24, 1949, Tom and Ginny were married. After graduating from OU, Tom found employment in the oil industry and moved around the central US following the expansion of oil fields. He was finally transferred to Enid, Oklahoma where he decided to stay. At this point, Tom became an independent geologist. For years, Tom and Ginny had worked together on the design of their future dream home. Finally, with the purchase of the 10-acre parcel, they began construction. This home became the focal point where Tom’s extended family and friends gathered. Tom and Ginny were planning for their 50th wedding anniversary occurring in December of 1999. Then in late November, following a fall and an emergency insertion of a pacemaker, she died unexpectedly. In the 50 years Tom and Ginny shared a life together, their favorite thing was to share it with others. They had seven grand kids from their 3 children and they made the most of it. Every summer they would have them all out for a week or two to spend time in the Enid house, go on road trips to national monuments, fishing, or just getting up to general mischief. Tom was a lot of really wonderful things and that included the best grandfather there ever was. After Ginny's death, Tom decided to return to the Grove area. It was there that he met Ellan Hamm while attending exercise sessions at Grove's Civic center and at routine dinners hosted by Ellen's retirement center. Very soon, they were married. Their time together was a little magical, and Ellen was loved by everyone who met her, but especially by Tom. Too soon, Ellen also passed, leaving a void in Tom's life. For the last three years, Tom's love has been Oneeta (Manning) Berry, a widow and former high school classmate. She and Tom sat next to each other for most of their school years. They were devoted to each other and saw each other daily. She says Tom is one of the finest men she has ever known. Some of the highlights of Tom’s life have been his experience in WWII – where he wouldn’t take a million dollars for the experience, but wouldn’t give a dollar to do it again. His trip to England with Ginny, and seeing his son graduate from college. Tom served as a deacon of his church, while also serving as an Elder, Chairman of several departments, and Chairman of the general board while living in Enid. Tom is survived by his brother, two children, seven grandchildren, and eight greatgrandchildren. Viewing for friends and family will be available from 9-5pm Monday and Tuesday, April 5th & 6th at Nichols-Stephens Funeral & Cremation Services. Graveside services will be at 1pm Thursday, April 8, 2021 at Memorial Park Cemetery in Enid, OK.

The family of Thomas “Tom” E. Witty created this Life Tributes page to make it easy to share your memories.

Send flowers to the Witty family.