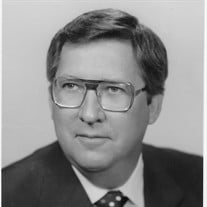 Stanley Edward Crawford, Sr., age 86, of Grove, Oklahoma, passed away on March 15, 2019. Stan was born on December 22, 1932 in Syenite, Missouri to Benjamin and Jennie Walker Crawford. Mr. Crawford served in the United States Air Force in the Korean War as a cryptographer. He received both a BS degree and an MS degree in accounting from the University of Missouri. He started his career as a CPA for Arthur Andersen& Co. and retired from Mustang Fuel in Oklahoma City as CFO. He was a member of the Oklahoma Society of CPAs, the AICPA, and served as president of FEI. Stan also served on the board of Hospice and Big Brothers and Big Sisters in Oklahoma City. Stan will be best remembered for his devotion to his family and his dedication to his hobbies. Despite his busy professional career, he took the time to coach many of his children’s’ baseball and softball teams and was in regular attendance at school activities. He loved to fish and go bird hunting and he excelled at both. In retirement he earned a Master Gardener Certificate and his expansive garden was a source of great pride and produce throughout the years. He is survived by his wife Doris, and their four children, Sharon DeChiara of Katonah, NY, Stan Crawford, Jr. and wife Audrey of Grove, OK, Lisa Gholston and husband Cris of Dallas, Texas, and Greg Crawford of Katonah, NY. Also survived by his 8 grandchildren; Stan Crawford III and wife Libby, Andrew Crawford and wife Megan, Ellise Perryman and husband Jared, Greg Crawford, Jeff Crawford, Emmanuel Crawford, Luke and Madeline Gholston, and 4 great grandchildren; Stan Crawford IV, Eleanor Crawford, Charlotte Crawford, and Autumn Crawford. He was preceded in death by his parents, two brothers, John and Darrel Crawford, and sister Connie Porter. In lieu of flowers donations to Bible Study Fellowship International or Touch A Life Foundation would be appreciated. A private family celebration of life will be held at a later date.

The family of Stanley E. Crawford Sr created this Life Tributes page to make it easy to share your memories.

Send flowers to the Crawford family.