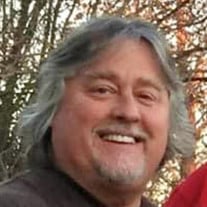 Ronnie “Joe” Neal was born on December 12, 1963 and according to his brothers, he was an instant momma’s boy and caretaker. He spent his childhood in Bartlesville, Oklahoma riding bikes with his brothers on the motorcycle trails and around town. They worked the newspaper routes and got really good at traveling through the snow and ice and saving money for the pinball machines. They eventually traded bicycles for motorcycles. Joe is still known as the guy who pulled the clutch in, throttled, and dumped the clutch and had a motorcycle take off without him, leaving him on the ground. The laughs and memories continued through Little League and family baseball games. Joe traded his ‘67 Camaro for a family car when his first child, Samantha, was born. He cried tears of joy and was 100% invested in the life as a dad. A perfect trio was formed when his son, Brandon was born next. It wasn’t long before he was showing them the love of cars, camping and long drives listening to “Classic Rock” and old country. In 1999, he followed his children to Grove. He took over a photography business where he established “Neal Studio,” he got to use his Associates Degree in Art and Graphic design, explore his artistic abilities and he “captured many hearts.” After leaving Grove, he joined his brother, Danny, in the plumbing business. This struck the chord for working on buildings which gave him the opportunity to learn and become naturally skilled at rural construction and woodworking. He remodeled his metal home several times for creativity and enjoyment. In addition to remodeling his home, he spent time investing in old cars and restoring them. His nephew knew when Uncle Joe brought in a new car that he would be playing mosaic puzzles with him for the next few hours until his car lot got situated. He spent the last five years of his life fulfilling the role as the “best” papa ever and antagonist to his son-in-law, Josiah. His granddaughter, Raegan, enjoyed drawing, painting, and long walks sitting on Papa’s shoulders. They would often cuddle and watch TV together. His grandsons, William (Will) and Gideon (Gid) enjoyed building Hot Wheels tracks and going to car shows with their papa. Joe loved staying close to family and friends because he desired taking care of others. He was easy to talk to and hang out with. He loved making up his own rules to game nights and to life. He told his daughter once, “You can always make more money, you can’t make more time.” Ronnie Joe Neal joined his mother, father and siblings in Heaven on Tuesday, July 27, 2021. He was predeceased by his Father, Doy Neal, his Mother, Reva Smith, his older brother, Danny Neal, his little sister, Connie Neal and joined the gates with step-father, Dennis Smith. He is lovingly remembered as the “best brother,” by Donnie Neal and his wife Donna Neal. He will always be remembered as the best father by Samantha Davis, her husband Josiah Davis, and Brandon Neal; the best papa to Raegan Neal, William Davis, and Gideon Davis; the best Uncle Joe to many nieces and nephews; and best friend to all who knew him. The family requests that in lieu of flowers a letter be written to his children/grandchildren sharing your favorite memory of Joe. Online tributes can be posted at www.nicholsfuneralandcremation.com Donations in Joe’s memory may be made to the Ronald McDonald House. Memorial services will be at 2pm Sunday, August 8, 2021 at Nichols-Stephens Chapel. Arrangements entrusted to Nichols Stephens Funeral & Cremation Services.

Ronnie &#8220;Joe&#8221; Neal was born on December 12, 1963 and according to his brothers, he was an instant momma&#8217;s boy and caretaker. He spent his childhood in Bartlesville, Oklahoma riding bikes with his brothers on the motorcycle trails... View Obituary & Service Information

The family of Ronnie Joe Neal created this Life Tributes page to make it easy to share your memories.

Send flowers to the Neal family.