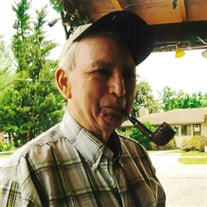 Richard L. Harris, age 85, of Grove, OK passed away Sunday, August 23, 2015 at Mercy Hospital in Joplin, MO after a short illness. Richard was born on April 30, 1930 to Earl and Olive (Derr) Harris, one of 9 children, in Ft. Dodge, Iowa, where he grew up and attended school. After high school, he enlisted in the U.S. Army. Military service proved to be Richard’s life work and he dedicated 20 years to his country, serving in the Korean War and in Vietnam. While stationed in Frankfurt, Germany, Richard met and married the love of his life, Helga von der Helm on December 3, 1965 and the couple made their home in Frankfurt. After retiring from the U.S. Army, he attended John Tyler Community College in VA earning an Associates Degree and accepted a position at Phillip Morris Co. in Richmond, VA. In 1989, the couple moved to Grove from Petersburg, VA to be near their daughter, Gabi Ryan. Gabi and her husband, Terry, owned and operated the Rheingarten Restaurant in Grove, where Richard was a regular fixture. He happily provided maintenance service and even did a little bartending at the restaurant. Tinkering was his passion and he was always “fixing” something. Richard loved life and people and his enthusiasm was contagious. He often shared his story of “cheating” death after a massive heart attack dubbed “the widow maker” and living 10 more years, making the most of every single day with his best friend/wife by his side. He was preceded in death by: his parents, 7 siblings and son-of-the-heart, Dieter Buchstein. Richard will be dearly missed by his family: wife of 49 years, Helga Harris, daughter, Gabi Ryan and husband, Terry, all of Grove; grandson Kevin Ryan of Broken Arrow, OK., granddaughter Kelly Stockton of Ft Gibson, OK., sister, Bonnie Walton of Sun City, CA., 9 great grandchildren and 1 great, great grandchild. A Memorial Celebration will be held at 4pm Thursday, August 27, 2015 at Nichols Funeral Chapel in Grove.

The family of Richard L. Harris created this Life Tributes page to make it easy to share your memories.

Send flowers to the Harris family.