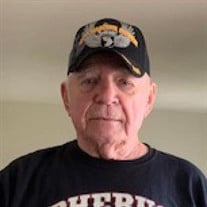 Raymond R. Phebus, age 82, of Grove, OK passed away on Wednesday, September 30, 2020 at his home after a short battle with cancer. Raymond was born on February 14, 1938 to Clyde and Susie (Whipkey) Phebus in Fairland, Ok. At a young age he moved to California with his Family, where he grew up and graduated from high school. He joined the Army in August of 1956 and proudly served his country for 4 years as a Combat Engineer in the 101st. Airborne Unit and received the Parachutist Badge. After his time in the military, Raymond went to work in Mining Construction and worked on projects all over the United States. He retired as an Operation Engineer in Las Vegas, NV. While working in Nevada, his endeavors included construction projects at the Nevada Nuclear Test Site. He recalled testing on Nuclear bombs and working next to Area 51. On March 4, 2000 Raymond married Guadalupe Juarez Velez in Las Vegas, NV after a short 2 week dating period, when he retired, they decided to make their home in Grove, OK. After retiring, Raymond enjoyed bowling in leagues and participating in many National Bowling Tournaments, he also enjoyed other sports. He was highly competitive and not necessarily a “good loser”. If a person was to beat him in a card game or dominos, many times he would good heartedly refuse to play them anymore. Raymond work extremely hard all his life so when he finally retired, he enjoyed it to the outmost. Traveling was one of his favorite past times, including cruises to the Panama Canal and throughout Europe. His dream was to go to Hawaii and see Pearl Harbor and, in January of this year, he and his family made the trip and his dream came to fruition. Raymond also enjoyed many road trips with his family all over the United States. A quiet, rather shy man, Raymond was a good man that always saw the best in people and loved his family dearly. Raymond was preceded in death by his parents, brothers Dale and George and sisters Freida and Aronda. Left to cherish his memory, wife, Guadalupe Phebus, daughters, Alicia Pimentel, Aronda Sue Wilson, Cynthia Phebus, Sheila Albert and Celeste Atkins, as well as many grandchildren, nephews and nieces. Visitation will be from 5-7pm Tuesday, October 6, at Nichols Stephens Funeral Service. Funeral Mass will be at 11am Wednesday, October 7, at St Elizabeth’s Catholic Church in Grove followed by a memorial service at Nichols-Stephens Funeral Chapel.

Raymond R. Phebus, age 82, of Grove, OK passed away on Wednesday, September 30, 2020 at his home after a short battle with cancer. Raymond was born on February 14, 1938 to Clyde and Susie (Whipkey) Phebus in Fairland,... View Obituary & Service Information

The family of Raymond R Phebus created this Life Tributes page to make it easy to share your memories.

Send flowers to the Phebus family.