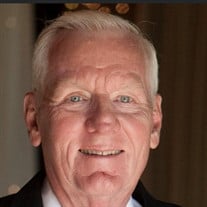 Oakley D. Warren II, age 74, of Wyandotte, Oklahoma passed away in Joplin, Missouri on November 20, 2020 surrounded by his three children. Oakley was born January 22, 1946 in Dayton, Ohio to Oakley D. and Marjorie D. (Carau) Warren. He graduated from Orange High School in Orange, California in 1964. He took classes at California State University in Fullerton, California, and later attended NEO A&M in Miami, Oklahoma. During High School he worked as a magician at Merlin's Magic Shop at Disneyland in Anaheim, California! While in California, Oakley proudly enlisted in the United States Army. He was truly a war hero and served in Vietnam in the infantry as a door gunner and finally his third tour he flew Hueys. He was awarded many medals including 3 Bronze Stars, 2 Purple Hearts, 24 Air Medals, Army Commendation Medal, just to name a few. He attained the rank of First Lieutenant. He married Sharrie Guest in California and they eventually moved to Grove, Oklahoma in 1974. He managed the Empire Gas Company for many years, meeting his second wife Mary Ann during his time there. She preceded him in death. He later worked as a salesman at Snow’s Furniture in Tulsa for many years. Oakley was an avid Model Railroad Enthusiast and previously belonged to the San Diego “S” Gaugers Train Club in San Diego, California. He also was a member of the Model Railroaders Club. He also volunteered at the San Diego Police Department, as a RSVP member (Retired Senior Voluntary Patrol), often working up to four shifts a week. He was quite valued and respected there. Most recently, he volunteered at the Grove Police Department. His other obsession was working on his genealogy, learning about his family history. He was a hard worker, dedicating himself to being the best at whatever he was undertaking. He always gave 110% and instilled the same values in his children. He loved his children unconditionally, believing in them and pushing them to be the best they could be. His greatest loves were his grandchildren. Christmas was Oakley’s favorite time of the year, showing up at Christmas with his car filled with presents to the delight of his grandchildren. He could have listened to Christmas Music all year round! Oakley was of the Catholic faith. Oakley was preceded in death by his parents and his wife Mary Ann (Muffett) Warren. Left to cherish his memory are his children Oakley D. Warren III and wife Kim of Moore, Oklahoma, Roxanne K. Minnick of Tulsa, Oklahoma, and William A. Warren and Avery, of Allen, Texas; siblings Melinda Rozes of Palm Springs, California, John Warren and wife Jackie of Reno, Nevada; six grandchildren and two great grandchildren, along with a host of friends who share in their loss. Funeral Services will be 2 pm Monday, November 30, 2020 at Nichols-Stephens Funeral Chapel with military honors by the Grove Ritual Team. Oakley will be buried with full military honors at Arlington National Cemetery, Arlington, Virginia where his father was also laid to rest.

The family of Oakley D. Warren II created this Life Tributes page to make it easy to share your memories.

Send flowers to the Warren family.