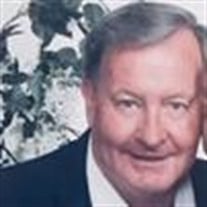 Norman Donald Hudecki, a proud Canadian, hockey player, referee, football player, geo chemist, and a fun-loving dad, husband and friend to all, passed away peacefully on February 9, 2022, in Grove, Oklahoma, at the age of 89. He lived a full life and will be missed by all who knew him. Norm was born on September 29, 1932, in Hamilton, Ontario, to Leo and Muriel Walton Hudecki. He was educated in Catholic schools in Hamilton where he learned to love science, developed skills as an athlete in multiple sports, and was taught foreign languages, including Latin, which he detested. After playing football and graduating from Cathedral Boys High School, his coach took him to Notre Dame to try out. He was disappointed that he was too small to make the team but did get a scholarship to nearby St. Joseph’s College where he played football and completed a degree in geology and chemistry. He remained a life-long fan of Notre Dame football, except for the one time they played Oklahoma State! After graduation, he returned to Canada where he used his expertise in chemistry to work at Proctor and Gamble in Ontario. A few years later, he returned to the U.S. to work as a chemist in the equipment test lab at International Harvester in Chicago. Norm served on several advisory boards and gained national recognition for his knowledge of automotive fuels and lubricants. He was recruited by Ashland Oil to work in their Valvoline Division as the Director of Technical Services and Worldwide Quality Control. In this role, he was Valvoline’s “head chemist”. He developed all their oil formulas for passenger cars and Indy and NASCAR race cars. He served as the technical advisor to the Valvoline race teams, which meant he spent lots of time at the Indy track and frequently traveled to NASCAR races. Norm established Valvoline’s engine test lab located in Ashland, KY, where he experimented with various additives to base oils to improve engine performance. He was highly regarded as an “expert” in his field, so was often called upon to conduct seminars, regularly provided advice to callers on radio shows, and wrote monthly columns of advice to consumers in over 50 newspapers. He chaired several committees of related technical and professional organizations, including the Society of Automotive Engineers and American Society for Testing and Materials, Fuels and Lubricants Division. In addition to his professional accomplishments, Norm was very involved with hockey programs. He wanted to make sure his three sons had opportunities to play in youth hockey leagues, but very few programs existed in the U.S. at that time. He decided to create more opportunities by organizing local hockey programs in Indiana and the upper Midwest. He was recognized as one of the founding members of the American Youth Hockey program and served as a regional director. He was also a referee for the AHA and so, as a former referee, Norm was very intense to sit beside when watching a hockey game! Norm met and married his wife, Phyllis, in 1993. After he retired from Valvoline in Lexington, KY, they made their home in Okmulgee, OK, and eventually built a home on Grand Lake O’Cherokees in Grove, OK. He is survived by his wife, Phyllis, son Mike Hudecki and daughter in law Chris, Ft. Wayne, IN, six grandchildren Jennifer, Andrew, Kate, Ashley, Chad, and Norman, and a host of nieces and nephews in Canada. He was preceded in death by his parents, and sons Mark Hudecki and Joseph Hudecki, sister Dorothy Worron, and brothers Bert Hudecki and Leo Hudecki. In recognition of Norm’s love of animals, especially dogs and cats, memorial contributions can be made to Second Chance Pet Rescue of Grove and Grand Lakehttps://www.secondchancepetsponsors.org/, or OK Save a Dog (oksaveadog.org). Memorial services planned at a later date.

Norman Donald Hudecki, a proud Canadian, hockey player, referee, football player, geo chemist, and a fun-loving dad, husband and friend to all, passed away peacefully on February 9, 2022, in Grove, Oklahoma, at the age of 89. He lived a full... View Obituary & Service Information

The family of Norman D. Hudecki created this Life Tributes page to make it easy to share your memories.

Send flowers to the Hudecki family.