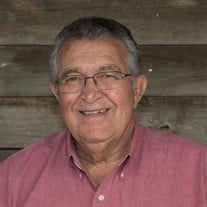 Mervin R. Bennett, age 78, of Grove, OK went to be with his Lord on Saturday, November 24, 2018 at Freeman Hospital in Joplin. Merv was born on March 16, 1940 to Harold and Bernice(Norris) Bennett in Meramec, OK in an oil lease house. Merv’s grandfather, C.C. Bennett, owned Bennett Oil Production Company in Okmulgee. Nine days after Merv was born, his grandfather died so he and his family relocated to Okmulgee to take over the family business. Merv grew up working in the oil fields with his father. It was in his blood and proved to be his life’s work and passion. In the late 80’s, Merv and his father sold their oil company, but he continued to work as a Production Manager for 2 independent oil companies until retiring in the late 90’s. Merv proudly served in the U.S. Army Reserve and his last assignment was as an E6 Drill sergeant. Merv married the love of his life, Charlene Richardson, on February 14, 1981 in Beggs, OK where the couple made their home, later moving to Okmulgee and then Sand Springs. With his marriage to Charlene, Merv gained a son, David, and a daughter, Lisa, that he loved as his own and was a wonderful father to them. Nothing brought him more joy than being with and taking care of his family and later spoiling his grandchildren. A testament to Merv’s kind and giving character, he and Charlene fostered children until his health would no longer permit. That was the kind of man that he was. Always willing to put others before himself. Also easy going, with a great sense of humor, Merv had a joke for every occasion and loved to laugh. He will be dearly missed. The couple moved to Grove in 2010 from Sand Springs and became faithful members of Grove’s First Baptist Church. Merv was preceded in death by his parents and one brother, Clarence Bennett. Left to carry on his legacy: wife, Charlene Bennett of the home, son, David L. Raulston and wife, Linda, of Conway, AR; daughters, Lisa K. Helton and husband, Billy of Claremore, OK, and Kelli A. Jackson and husband, Keith, of Zena, OK and sister, Kathy Bennett; grandchildren: Haley M. Rose of Fayetteville, AR, Brandon D. Raulston of Conway, AR, Austin L. O’Banion of Fort Campbell, KY, Emily M. O’Banion of Pittsburg, KS, Preston M. Crawford and Peyton M. Crawford both of Claremore, OK and nephews Rex Bennett and Troy Warrick and nieces Camille Bennett and Shannon Sutton. A visitation will be held from 4-6pm Tuesday, November 27 at Nichols-Stephens Funeral Service new location, 10201 U.S. Hwy 59, Grove. Funeral services will be at 10am Wednesday, November 28, 2018 at Grove’s First Baptist Church. Graveside services and brief viewing will be held at 2pm Wednesday, November 28, 2018 at Okmulgee Cemetery in Okmulgee, OK.

The family of Mervin "Merv" Ray Bennett created this Life Tributes page to make it easy to share your memories.

Send flowers to the Bennett family.