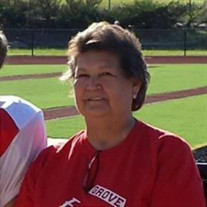 Laurie A. Heffelman, age 67, passed away on Saturday, January 22, 2022, at Integris Grove Hospital. Laurie was born on March 26, 1954, to Roy and Geraldine (Bearskin) Stovall in Claremore, OK. On June 19, 1997, Laurie married the love of her life, David Heffelman in Miami, OK. Together they raised not only their 3 children, but many others that passed through along the way. Laurie loved her family immensely, and if you were under her roof then you were family. Cooking was one of Laurie’s love languages, whether it was for her family, friends or the Seneca Cayuga Tribal functions. Gardening plants and flowers were some of her favorite past times and she worked in the Lawn & Garden department at Lowe’s for some time. Laurie was creative and generous with her time, organizing many tribal benefits and preparing gift baskets to raise money for the Seneca Cayuga Tribe. Laurie also enjoyed crafting, beading, sewing and crocheting. She is preceded in death by her parents, sisters: Susie Nuckols, Edie Bowers, Deana Mersman and Trudy White, brothers: Leroy Howard, Leslie Howard, Roy Stovall, Tom Stovall and Jimbo Stovall. Left to cherish Laurie’s memory, husband of 24 years, David Heffelman; children: Darius Donohue (Kelly) of Tulsa, Ok, Kristina Donohue and DaWayne Heffelman, both of Grove, Ok; sisters: Carol Hammond of Joplin, MO, Shine Carson, Tulsa, Denise Garwood, George Ann Stovall and Donna Francis of Miami, OK; 10 grandchildren and 1 great grandchild. Visitation will be from 1pm Sunday, January 23, at the Seneca Cayuga Community Building, until the Funeral Service at 2 p.m. Monday, January 24, 2022 at the Seneca-Cayuga Community Building. Interment will follow at the Bassett Cemetery, north of Grove, Oklahoma.

The family of Laurie Ann Heffelman created this Life Tributes page to make it easy to share your memories.

Laurie A. Heffelman, age 67, passed away on Saturday, January...

Send flowers to the Heffelman family.