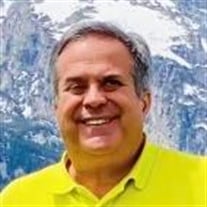 Kenneth J. Hines, Jr., age 61, beloved son, husband, father, educator and friend passed peacefully from this world into eternal life with his wife and daughters by his side. Ken was born on May 15, 1960, to Kenneth and Norma Hines in Oklahoma City, OK, where he grew up and graduated in 1978 from Western Heights High School.   While playing in the band at the University of Oklahoma, Ken met the love of his life, Lori Ousley, and they were soon married and planned a beautiful life together.  The couple made their home in Shreveport, LA, where Ken had accepted a management position with Kroger Foods.   Ken eventually had to leave his job due to a rare condition that took much of his vision.  After that, they returned to Lori’s hometown of Grove. Ken and Lori were loving parents to their two beautiful daughters, Kristen and Lauren. Ken was their biggest fan and treated his girls like real-life princesses.  When Kristen later married Bryan and had children of their own, Ken became the world’s best Poppa to his grandsons, Keegan and Brooks. His family was his greatest joy and being a Poppa took that joy to a whole new level.  Ken was just as important to his friends and to the community. From working nearly full-time at the elementary school as an unpaid volunteer to supporting his church and helping the less fortunate in our community, Ken would literally give his last penny to help others.  Ken was a founding member of the Grove Education Foundation for Excellence and designed the logo that is still used today. Volunteering nearly every day at the elementary schools, Ken loved the time that he spent with the kids and enjoyed working with the advanced and gifted students as well as those who were struggling and needed a little extra help. Ken was a talented musician. He taught himself to play the bass guitar and joined the praise band at his church, First United Methodist Church of Grove. His church family was an extension of his own, and he was passionate about helping others and sharing the love of God. Ken enjoyed traveling with his family. They have had many adventurous vacations filled with lots of love, laughter, and memories. Ken recently checked an item off his bucket list, climbing a precarious mountain trail in Grand Teton National Park, WY. This would be difficult for a fully sighted person, let alone for someone like Ken who was almost totally blind. He never let his lack of vision hold him back in any area of his life. Ken was preceded in death by his father, Kenneth J. Hines, Sr. Left to cherish his memory and carry on his legacy of love, his mother, Norma Hines of Grove; devoted wife, Lori Hines; daughters: Kristen Cross (Bryan) of Jenks, OK, and Lauren Hines of Glenpool, OK; grandsons: Keegan and Brooks Cross; sister, Gina Moore (Robert) of Grove and nephew, Justin Moore (Tabi Spruill) of Muldrow; and niece, Kendra Shephard (Josh) and several cousins.  A celebration of Ken’s life will be held at 2:30 P.M. Sunday, October 3, 2021, at the First United Methodist Church.  Pastor Randy Hamill to officiate.  The family will receive friends and have refreshments following.  Donations may be made to the the Hines family through gofundme or to the FUMC Praise Band to purchase instruments. Arrangements entrusted to Nichols-Stephens Funeral & Cremation Services.

Kenneth J. Hines, Jr., age 61, beloved son, husband, father, educator and friend passed peacefully from this world into eternal life with his wife and daughters by his side. Ken was born on May 15, 1960, to Kenneth and Norma Hines in Oklahoma... View Obituary & Service Information

The family of Kenneth “Ken” J. Hines Jr created this Life Tributes page to make it easy to share your memories.

Send flowers to the Hines family.