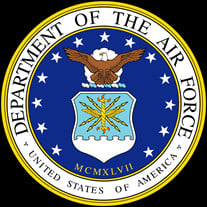 Johnny “John” R. Wene, age 88, of Grove, Oklahoma passed away peacefully at his home on Tuesday, August 6, 2019. John was born to Arthur and Maude (Porter) Wene on April 18, 1931 in Harper, Kansas, where he grew up on the family wheat farm. He graduated from high school in 1950. In December of 1950, he joined the U.S. Air Force and proudly served his country for nearly 10 years during both the Korean and Vietnam Wars, receiving the Air Force Outstanding Unit Award and Air Force Longevity Service Award. John also served in the Army National Guard of Kansas, Kansas National Guard and the Air National Guard of Kansas. He was a life member of the American Legion, VFW and Masonic Lodge. After his tours in military service, John returned to Kansas, settling in Wichita, where he met and married Lucille “Jean” Huffstetler on January 1, 1981. They were married for 38 years. He worked as a mail carrier for U.S. Post Office in Wichita until retiring in 1987 after 21 years. After retiring, the couple moved to Grove, where John was a proud member of the Masonic Lodge, VFW and American Legion. He enjoyed woodworking and collecting padlocks & keys which he enjoyed refurbishing. John was preceded in death by his parents, one brother, Jim Wene and one sister, Verona Olson. He is survived by his wife, Lucille “Jean” Wene of the home in Grove, step-son, Lynn Huffstetler of Wichita, Kansas and sister, Ardith Battershell of Columbia, Missouri. Memorial services will be at 2pm Monday, September 16, 2019 at the First United Methodist Church with reception to follow at the church. Pastor Randy Hamill to officiate, as well as Masonic Rites and Military Rites. Donations may be made to First United Methodist Church in John’s memory. Arrangements entrusted to Nichols-Stephens Funeral & Cremation Services.

The family of Johnny R. Wene created this Life Tributes page to make it easy to share your memories.

Send flowers to the Wene family.