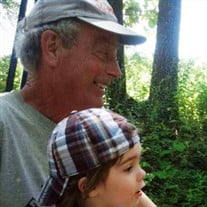 Jimmy L. Chancellor, age 78, of Jay, OK passed away peacefully at his home on July 10, 2020. Jim was born on October 4, 1941 to William and Jewel (Becker) Chancellor in rural Ottawa County. He graduated from Fairland High School in 1960. Jimmy was married to Sheila Erdwin for 20 years and from that union 3 daughters were born. Jim was a hardworking Lineman with Public Service Company of Oklahoma for over 35 years. He attended Zena Baptist Church as his health permitted and was an avid softball and baseball player in his younger years, later settling for golf. Tinkering on his farm, mowing and being outside were some of the things that Jim enjoyed most. He will be remembered as a guy who could fix and build anything, as a man with a kind heart that would help anyone willingly, but also with a bit of a stubborn streak. Jim loved Cardinal baseball and his family always thought he would leave this world “sliding in to home plate” and he said to just bury him there. He is preceded in death by his parents. Left to cherish Jim’s memory 3 daughters: Jennifer Hall (Billy) of Raleigh, North Carolina, Holly Cuthbertson (Robert) of Arcadia, OK and Libby Sarwinski (Connor) of Tahlequah, OK; siblings: Fred Chancellor, Jr (Judy) of Afton, OK, Donald Chancellor ( Brenda) of Wyandotte, OK, Kathy Frazier (Bruce) of Anderson, MO, Loretta Gilion (Earnie) of Anderson, MO, Erma McElhaney of Miami, Ok and Freida Medlin of Neosho, MO and 12 grandchildren and many nieces and nephews. Graveside services will be at 10 am Tuesday, July 14,2020 at Hickory Grove Cemetery. Chaplain Gary Bishop to officiate. Donations may be made to St Jude’s Children’s Hospital in Jim’s memory. Arrangements entrusted to Nichols-Stephens Funeral & Cremation Services. Online condolences may be made at www.nicholsfuneralandcremation.com

Jimmy L. Chancellor, age 78, of Jay, OK passed away peacefully at his home on July 10, 2020. Jim was born on October 4, 1941 to William and Jewel (Becker) Chancellor in rural Ottawa County. He graduated from Fairland High School in 1960.... View Obituary & Service Information

The family of Jimmy L. Chancellor created this Life Tributes page to make it easy to share your memories.

Send flowers to the Chancellor family.