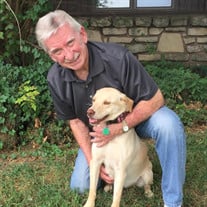 Jerry Leon Gibbons was born on April 9, 1937 and died on September 30, 2021. He was a resident of Grove, Oklahoma but in the process of moving to the Kansas City metro area to be near family. Jerry was born and raised in Southwest City, Missouri and graduated from Southwest City High School. He was one of three children of the late Jerome and Marguerette Gibbons. Jerry was a Navy veteran (1956-1960) who served as a Navy Corpsman with the 3rd Marine Division at Twenty-Nine Palms Marine Corps Base and later at Parris Island, South Carolina. Following his discharge, he obtained his degree in Pharmacy from Southwestern State University in Weatherford, Oklahoma. He was employed at several pharmacies in the Tulsa area while attending the University of Tulsa for Pre-Med. He entered the Kansas City College of Osteopathic Medicine (now Kansas City University of Medicine and Biosciences) in 1966, and graduated with a Doctor of Osteopathic Medicine degree in 1970. After two years of family practice and a three-year residency in Anesthesia, he became a staff Anesthesiologist at Enid Memorial Hospital until 1978, before going to Tulsa Regional Hospital, where he remained until 1988. He then became Chief of Anesthesia at Deaconess West Hospital in St. Louis, Missouri. He semi-retired in 2000, joining the staff of Freeman Hospital in Joplin, Missouri to finish out his career in medicine. When he fully “retired” in 2006 to his home on Grand Lake in Oklahoma, he and his friends, Pete Norwood and Dr. Barry Miller, purchased and ran Honey Creek Landing Marina in Grove, Oklahoma until July 2021. Jerry’s accomplishments throughout his long and prosperous life were many, but his family, friends, faith and patriotism were what made him an honorable man we will all miss. Jerry is survived by his wife Pamela Gibbons of Grove, Oklahoma; three children, Jack Lee Gibbons of Alameda, California, Danielle Gibbons of Prairie Village, Kansas, and Jason Gibbons of Dardenne Prairie, Missouri; four grandchildren, Jake and Joe Gibbons, Laura Gibbons, and Colin Babb; and a sister, Mary Kay Kelley of Gravette, Arkansas. He is preceded in death by his brother, Jack Williams. Above all, he wanted to be remembered for his legacy as a loving father and grandfather. And he accomplished that in spades. All of Jerry’s friends are invited to attend a wake in his honor, to celebrate his life and share their memories. Liturgical services and eulogies will be held at 2 pm on October 30, 2021 at Nichols-Stephens Chapel, 10201 U.S. Hwy 59 in Grove, Oklahoma, with reception and celebration of his life immediately following. In lieu of flowers, please donate to Kansas City Hospice & Palliative Care, www.kchospice.org.

Jerry Leon Gibbons was born on April 9, 1937 and died on September 30, 2021. He was a resident of Grove, Oklahoma but in the process of moving to the Kansas City metro area to be near family. Jerry was born and raised in Southwest City, Missouri... View Obituary & Service Information

The family of Dr Jerry L. Gibbons created this Life Tributes page to make it easy to share your memories.

Send flowers to the Gibbons family.