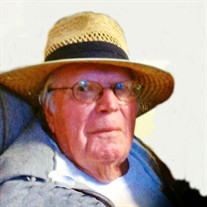 James (Pops) L. Stanbrough earned his wings on September 23, 2017 at 9:30pm in Bella Vista, AR. He was 94. A lifelong resident of Grove and highly decorated war veteran, he was loved by many. Pops was born in Kingfisher, OK and came to Grove with his parents during the dust bowl when he was just 13. After graduating from Grove High School in 1942 he joined the military. Shortly after completing basic training he was on his way to war. He would later become a highly decorated war hero, saving lives and giving his all to defending our country. He also received many medals and honors during his years dedicated to his country, including 2 shining Silver Stars, third highest combat award for Valor our nation can give, a Bronze Star with V for Valor, and a Purple Heart. He also received many ribbons with stars that covered the left breast of his IKE jacket. He completed 30 continuous months of battle and received an honorable discharge. To hear him tell the remarkable stories of his experiences was an honor and would make anyone be proud to be an American. There is so, so much more that cannot be contained here about this amazing man. He was very proud of his service to our country. He married Regina Harper in 1946 and she was the sparkle in his eye. They had 3 children. James Lee, Leigh Ann, and Ray Lee. Pops loved to talk about his kids. He was very proud of each of them and being a husband and father was one of his greatest joys in life. Sadly, Regina, Lee Ann, Jim and his canine companion, Butkus, would all pass before him. The stories he told of them would always bring tears to his eyes, but he knew that someday he would see them again. Pops had so many amazing stories to tell and listening to him never got old. In his early years in Grove, he owned Jim’s Service Station that would later become Dinks. He was also one of the very first 1st responders of Grove as well as a firefighter. He was a huge fan of horse racing and football. One of his favorite hobbies was RVing with his family. He also loved to play paper bingo and had a canine best friend named Butkus, a Bullmastiff, that stayed at his side every minute. Pops was absolutely one of a kind. He was always smiling and telling jokes and loved to make people laugh. Everyone that knew him loved him and you can bet that he will be missed! Graveside service will be 10am Tuesday, October 3, 2017 at Olympus Cemetery which will be his final resting place next to his wife Regina, his son Jim and his daughter Leigh Ann.

James (Pops) L. Stanbrough earned his wings on September 23, 2017 at 9:30pm in Bella Vista, AR. He was 94. A lifelong resident of Grove and highly decorated war veteran, he was loved by many. Pops was born in Kingfisher, OK and came to Grove... View Obituary & Service Information

The family of James "Pops" Lee Stanbrough created this Life Tributes page to make it easy to share your memories.

Send flowers to the Stanbrough family.