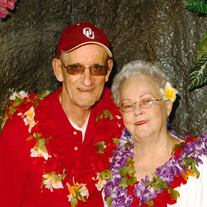 James “Jim” David Clark, age 75, of Grove, OK passed away on Friday, March 4, 2016 at his home after a long illness. Jim was born on June 29, 1939 at Broken Arrow, OK to Joe and Alice (Rose) Clark. He graduated form Will Roger High School and married Peggy Lou Wood on July 9, 1960. He began working at Colonial Market as a sacker and delivery boy and ended up as the owner. Jim closed the store in the early 70’s and began working in maintenance for U-Tote-M, Circle K, Bank 4 and Equity Residential Proper. Upon retiring, he moved to Grove and went to work for Wal-mart Deli and was known as “Hat Man”. Jim was preceded in death by: his parents, wife, Peggy Clark, sister Bessie Brandon, brothers: Francis Clark and Earl “Popcorn” Clark, and grandson David. He is survived by: daughter, Janet Miraglio and husband, Larry; son Dale Clark and wife Pat Carpenter; sister, Irma Payne, 3 grandchildren, 2 great grandchildren and many nieces, nephews and cousins. Memorial services for James and his wife, Peggy, will be held at 11am Friday, March 11, 2016 at the Church of Christ in Grove, OK.

The family of James "Jim" David Clark created this Life Tributes page to make it easy to share your memories.

Send flowers to the Clark family.