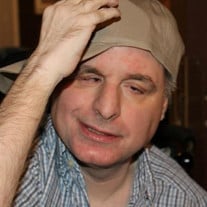 Jackie Allen Cooper went to be with Jesus and his grandparents on August 4, 2017. Jackie was born in Wichita, KS on January 13, 1967 to Cheryl (Hendren) and Allen W. Cooper. Jackie was born with Rubella Syndrome and was slow to develop, but was always a blessing and a joy to his family and friends. At 6 years old he entered Hissom Memorial Center School in Sand Springs, where he took advantage of an amazing state grant for the Blind and Deaf. He loved his teachers and staff, and they taught him basic and advanced skills as well as a modified sign language. He communicated mostly through his gestures and mannerisms, but he always made his wants and needs known. His Step Father Mike Marshall came into his life when he was 3 years old, and Jackie’s father graciously allowed Mike to raise Jackie as his own, as he continued his career in the Marine Corps serving our country during extensive worldwide travels. Therefore, Jackie was blessed to have two loving fathers. Mike became Co-Guardian with Cheryl and they made decisions about his life as he grew up, providing him with the best of care. In 1992, as Hissom was closing, Jackie moved to his own home in Grove, which was proudly purchased for him by his mother and Jack Smith. The home was staffed 24 hours a day by Volunteers of America. In 2010 Jackie suffered a severe brain stem bleed confining him to a wheelchair. At this time, Nursing Staff was required, so his care was transferred to ResCare of Oklahoma. His staff has always been a tremendous blessing to him, as he was to them. Cookies and white donuts were his favorite, and he knew where the ‘cookie jar’ was kept when he wanted to sneak some. He loved the water, the sunshine and swinging. Next to visiting his Nana, his favorite days as a child were spent at the park or on the back yard swingset with his brother Michael and sister Michelle. Anywhere he went he found the brightest spot of sunshine and placed himself in it. He looked forward to frequent visits from his Mama, and the love and affection that he and his mother shared was undeniable, as he insisted on long hugs and kisses and his big smiles were contagious, bringing pleasure to all around him. Jackie was preceded in death by his paternal grandmother Ruby Cooper, and maternal grandparents Jack and Wanda Hendren, and uncle Sam Cooper. He is survived by his Mother Cheryl Marshall and husband Wes Holt, Father Allen W. Cooper and wife Valerie, Father Mike Marshall and wife Sherry. He is also survived by siblings Michael Marshall and wife Amanda, Michelle Martin and husband Al, Peter Cooper and wife Jaime, and paternal grandfather Allen F. Cooper. Also surviving are his personal nurses Joyce Fuller and Suzanna Sly and caregivers Amy Ferris, Rob Ferris, Shannon Grass and Heather Howerton, as well as Coordinator Joy Dunback, and his best friend Billie Horner. In addition, he is survived by dozens of aunts, uncles, nieces, nephews, cousins, extended family, caregivers and friends. A special thank you to his amazing caregivers, past and present, as well as Chaplain Marty Hughes who sat with us and prayed with us, Dr. Kitchens and the caring nurses at Integris Grove Hospital. There will be a visitation at Nichols Funeral Home on Monday, August 7th from 5 – 7, and Services for this special young man will be at First Baptist Church in Southwest City, MO at 2 p.m. on Tuesday August 8th with his uncle Pastor Marty McCord and Pastor Rob Grimm officiating. Burial will be at Wann Cemetery, Gravette, AR next to his Nana and Daddy Jack (Hendren).

Jackie Allen Cooper went to be with Jesus and his grandparents on August 4, 2017. Jackie was born in Wichita, KS on January 13, 1967 to Cheryl (Hendren) and Allen W. Cooper. Jackie was born with Rubella Syndrome and was slow to develop, but... View Obituary & Service Information

The family of Jackie Allen Cooper created this Life Tributes page to make it easy to share your memories.

Jackie Allen Cooper went to be with Jesus and his grandparents...

Send flowers to the Cooper family.