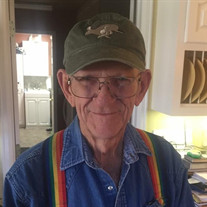 Jack Alvin Brewer, age 79, longtime resident of Grove, passed away on April 4, 2018 at his home after battling Alzheimer’s. Jack was born the 4th of 9 children, to Lloyd Dewey Brewer and Beulah Augusta (Green) Brewer, on March 24, 1939, in Grove. He attended the Delaware School and Grove High School, where he met Nancy Ann Crippen. They were married September 27, 1957 at Laverns Wedding Chapel, in Miami, OK. Shortly thereafter, the couple moved to Kansas City, MO., to look for work. Jack had a sharp mind for mechanics, and took a job as a Journeyman Machine Adjuster on maintenance crew at Sausland’s Envelope Factory, where he quickly rose to Foreman. Jack was a member of the International Printing and Graphic Communications Union, Local 639. He was employed with Sausland’s for 17 years. In 1960, Jack enlisted in the US Navy Reserve, doing his Basic Training at the US Navy Training Center, in Great Lakes, IL. In 1963, Jack took a fall from a loading dock, during active duty, which severely injured his back. He was told he would never walk again, and he was Honorably Discharged. He was determined to walk and he did, but it was ever after, a great disappointment to him that he wasn’t able to make a career in the US Navy, as he craved the discipline and work ethic that came with military life. In later years, when Veterans were asked to stand and be recognized, Jack had to be prodded to stand with them, because he didn’t feel he deserved to be recognized with men and women who had served during wartime. Jack adored children. He was a big kid himself. He frequently cared for the abundant number of children in his family and his wife’s family. Many family members and friends have frequently spoken of his having been a favorite of theirs, because he would rather pay attention to making up stories and games for them, than to mingle among the adults. On April 3, 1965, after trying for several years, to become parents, Jack and Nancy adopted a baby girl, Jackie Ann (Brewer) Kirby, through a private family adoption. Jack doted on his daughter, often making up songs to sing and games to play, even allowing her to curl his hair and paint his toenails. He was a patient and loving father and he was adored by his daughter. And when his granddaughter, Danette Renae Kirby was born in August of 2000, her PaPa was wrapped around her tiny finger, all the remaining days of his life. The city life didn’t seem to suit Jack, so he and Nancy moved back to Grove in May of 1974, to be near their families. Jack began working with his brother, Lloyd Brewer, in the mechanics shop behind Paul Roark’s used car dealership. When Lloyd purchased the Honey Creek Skelly gas station and garage, Jack continued to work for his brother. Jack also supplemented his income with jobs at the Glassmaster Boat Factory in Grove and eventually he came to work as a truck driver and Crew Foreman for Nick Nichols at the Grove Egg Company. After the passing of his friend, Nick, Jack took a Maintenance Foreman job at Simmons Foods Feed Mill, in Anderson, MO. After 14 years, he retired from Simmons, in September of 2001. Jack began to help his daughter Jackie and son-in-law, Kevin Kirby, at Grand Lake Pawn that same year, when Kevin’s father suffered a stroke and the family needed to help him recover. Jack was an avid gun collector and his extensive knowledge of firearms made him a huge asset in the pawn shop. He continued to to work there until 2016, when health issues made it impossible for him to do so. There were many endearing traits about Jack, but one thing that should be noted, is that Jack gave everyone a special nickname. To name a few, Nancy was “Punkinpuss”, Jackie was “Monkey Sue”, Kevin was “Sonny Boy” and Danette was “Sissy Girl”. That is a very short list, because there are too many to mention. Many readers can attest to this, because they too, have their own special name. Jack was preceded in death by his baby sister, Jennifer Brewer, parents, Dewey and Beulah, wife, Nancy, nephew, Curtis Brewer, sister, Julia Brown, brother, Lloyd Brewer, brother Cephus Brewer, niece, Shannon Clay VanHoose, and brothers-in-law, Robert Brown and Bill Clay. He is survived by his daughter, Jackie and husband Kevin Kirby of Grove, granddaughter, Danette Kirby, and honorary grandson, “Flash” Shelton Henderson of Grove, brother Jerry and Cleta Brewer of Grove, brother Mack & Carol Brewer of Grove, sister Carolyn Clay of Tulsa, and sister Vinita and Tom Sublette, of Edmond. Nephews, Danny Clem, Terry Clem, Kevin Brown, Randle Brewer, Mike Brewer, CJ Brewer, Steve Brewer and Mark Brewer. Nieces, Penny Clem, Tammy Wilson, Janet Shambles and Leanna Reed. And dozens of grand nieces and nephews. Memorial services for Jack will be at 6pm Friday, April 13, 2018 at Bible Baptist Church, where he was a member. Pastor Guy Morrow to officiate. A gathering for family & friends will be held from 5-6pm, prior to the service at Bible Baptist Church. Burial at Butler Cemetery will be held privately at a later date. The family requests memorial donations be made to Bible Baptist Church c/o Nichols Funeral Service 9611 Hwy 59 N. Grove, Ok 74344.

Jack Alvin Brewer, age 79, longtime resident of Grove, passed away on April 4, 2018 at his home after battling Alzheimer&#8217;s. Jack was born the 4th of 9 children, to Lloyd Dewey Brewer and Beulah Augusta (Green) Brewer, on March 24, 1939,... View Obituary & Service Information

The family of Jack A. Brewer created this Life Tributes page to make it easy to share your memories.

Send flowers to the Brewer family.