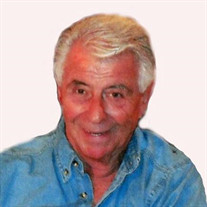 Henri L. Van Dam, age 78, of Grove, OK passed away Thursday, March 14, 2019 at his home surrounded by family, after battling cancer for 8 years. He was born on March 29, 1940 to Eduard and Bertha (Wijnschenk) Van Dam in Antwerp, Belgium. As a child, his family migrated to the United States through Ellis Island, NY, making their home in New York, and later moving to Chicago, IL. Henri graduated from Chicago’s Evanston High School in 1958. Henri joined the U.S. Navy and was stationed in Pensacola, FL. After the Navy, Henri made his home in Wichita, KS, for over 30 years, working at Equitable Insurance, Southwestern Bell Yellow Pages, PennyPower and Comcoa. He was always recognized as a top performer in every field that he entered. While at Comcoa, he opened 59 Rent-A-Center stores in the state of Florida and was known industry wide as a leading Rent to Own Operator. He was married over 20 years to his first wife, Karen (Miller) Van Dam, residing mostly in Wichita and had 2 children, Doug Van Dam of Tulsa and Timirie (Van Dam) Shibley of Wichita. After divorcing, Henri spent time in the Chicago area before moving to Tulsa, OK in the mid 1990’s, where he and his son opened and operated Customer’s Choice Rental & Sales (14 stores). On December 5, 1998, Henri married the love of his life, Linda Read, in Tulsa, OK, making their home in Grove, OK. With that union, Henri gained another daughter and blessed her with the Van Dam name, Kara (Van Dam) Sapp and loved her like his own. As a family they have owned and operated Grand Spirits Wine & Liquor in Grove. Henri was known for his larger than life personality, and outgoing charisma. With his quick wit and ornery streak, he was always entertaining. He was a self-professed lover of dogs and babies. He enjoyed all types of water activities and was an avid gardener. More than anything, he was a family man and treasured his time with his wife, children and grandchildren. He was preceded in death by his parents. Left to cherish his memory: wife of 20 years, Linda Van Dam, son Doug Van Dam and wife, Michelle of Tulsa, OK, daughter, Timirie Shibley and husband, Patrick, of Wichita, KS and daughter, Kara Sapp and husband, Clark, of Grove, OK, sister, Elise Smith of Syracuse, NY; five grandchildren, Jordan (Van Dam) Corbett, Taylor Van Dam, Zachary Van Dam all of Tulsa, Maci and Abbey Morgan of Wichita, one great grandson, Miles and many loving nieces and nephews, and his “fur-babies” Abbey, Kaci and Jessie. The family request donations be made to Second Chance Pet Rescue or St Jude’s Hospital in Henri’s memory. A gathering for family and friends will be from 6-8pm Tuesday, March 19, 2019 and Nichols-Stephens Reception Room, 10201 US Hwy 59 Grove, OK. A Celebration of Life will be held from 7-9pm Saturday, March 29, 2019 at Doo-Dah Diner, 1530 S. Webb Rd, Wichita, KS 67207. Hosted by Timirie Shibley & Kara Sapp.

Henri L. Van Dam, age 78, of Grove, OK passed away Thursday, March 14, 2019 at his home surrounded by family, after battling cancer for 8 years. He was born on March 29, 1940 to Eduard and Bertha (Wijnschenk) Van Dam in Antwerp, Belgium. As... View Obituary & Service Information

The family of Henri L. Van Dam created this Life Tributes page to make it easy to share your memories.