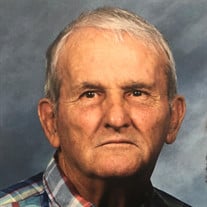 Grayden Robert “Bob” Epperson, age 91, of Grove, OK went to be with the Lord on November 14, 2020 at his home surrounded by his devoted family.  Bob was born on January 11, 1929 to Graydon and Hazel (Betts) Epperson in McDonald County, MO. He graduated from Grove High School in 1946 and served in the U.S.  Army in 1947-48.  After his military service, Bob returned home and married Betty Cantrell on January 3, 1953 in Eureka Springs, AR.  They were blessed with three children, Greg, Diane & Rachelle.  Bob worked as a Foreman at Public Services Company of Oklahoma for 33 years until retiring in 1984.  He was a member of the Grove Fire Dept for 20 years and involved in many civic activities, serving as Mayor of Grove in the 1960’s. A longtime member of the Church of Christ in Grove, Bob was baptized on June 12, 1960.  Riding horses, pheasant hunting and buying and selling anything, were Bob’s favorite activities.  He enjoyed listening to Trad-E-O to find old pickups and trailers to sell. Bob was a devoted husband, dad and grandpa and loved having dinners with all his family.  He was the funny, affectionate handyman of the family, that took care of everyone and adored his grandchildren.  He is preceded in death by his parents, 2 brothers and 1 sister. Left to cherish his memory, his loving wife of 68 years, Betty Epperson, son, Greg Epperson (Dee) of Grove; daughters, Diane Cave (Jim) of Stillwater, OK and Rachelle Lawson (David) of Southwest City, MO; 9 grandchildren: Ashley, Emily and Gregory Epperson, Keli and Kelsey Cave, Zach and Derek Lawson, Taylor and McKenzye Iverson; 3 great grandchildren: Grayden, Maisie and Timber; sister, Jadeen Osborn (Ralph) of Bristow, OK and numerous sister/brother-in-laws, nieces, nephews and a host of friends. Visitation for friends and family will be from 5pm-7pm Monday, November16, at Nichols-Stephens Funeral Service.  Funeral services will be at 10am Tuesday, November 17, 2020, at the Church of Christ in Grove.  Burial will be at Butler Cemetery. Donations in Bob’s memory may be made to The Church of Christ, 1001 S. Grand St Grove, OK 74344.

The family of Grayden “Bob” Robert Epperson created this Life Tributes page to make it easy to share your memories.

Send flowers to the Epperson family.