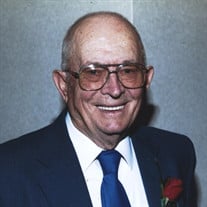 Gilbert Warren Woodie, known as ‘Woodie”, age 97, of Grove, went home to be with his Lord on Sunday, December 10, 2017 in the Veterans Hospital in Claremore, OK after battling cancer. Woodie was born in Warrenville, North Carolina to the union of R.L and Hester Woodie on October 4, 1920. He grew up in Cricket, N.C. and in 1941 joined the U.S. Army and served in World War II as a Tank Destroyer in Germany. After the service, Woodie moved to Oklahoma City, where he worked at BS&B as a steel worker. He also had a lawn and landscaping business. On October 10, 1985, he married Donna Wisdom in Oklahoma City, Ok. In 1993, the couple moved from Oklahoma City to Grand Lake in Grove where he dearly loved catching fish. His prize spoon bill weighed 63 ½ pounds and his biggest cat fish weighed 29 ½ pounds. Together they hosted many “catfish” parties that were enjoyed by many. Woodie was also was an avid deer hunter. In 2013, he was in Lahoma, Oklahoma with Daryl Kuhnemund hunting in separate places. Woodie called his friend to let him know he had a deer and when Daryl came over he said “Woodie, you got 3 deer!” 2 does and a buck, which was legal at Lanoma. Daryl and his friend, Jon, both shot a deer and they gave to Woodie. He brought 5 deer home in a Chevy HHR. The people at the slaughter house were quite amused that he had 5 deer in the car. Needless to say that was quite an experience. In 2014, Woodie traveled with Larry, his oldest son, on the Oklahoma Honor Flight honoring Oklahoma veterans in Washington DC and they had a wonderful time. In April 2016, he was honored at the event for veterans with a beautiful quilt from ‘We Care Quilters’. He received many awards while in the service. Woodie had a heart of gold and will be greatly missed and remembered by many people. Everyone he encountered quickly became a friend and was a beloved husband, father, grandfather and friend. He has one great canine friend, Luckii, the Boston Terrier, whom he loved to feed treats. He was preceded in death by his parents, his beloved wife Roaslie of of 43 years, son Edward, three brothers, one sister and two sister in laws. Left to carry on Woodie’s legacy: his beloved wife of 32 years, Donna of the home; sons, Larry Woodie and wife, Sue of Grove, Jim and wife, Beckie of Geary, OK, Don and wife, Ruth of West Melbourn, Florida and Jerry and wife Dena, of Oklahoma City, OK, 9 grandchildren, 16 great grandchildren, 5 great great grandchildren and many, many nieces and nephews. Visitation for family and friends will be from 6-8pm Wednesday, December 13, at Nichols Funeral Chapel. Funeral service will be at 11am Thursday, December 14, 2017 at Crosswired Cowboy Church, 28565 S 670 Rd, Grove. Graveside services will be at 11am Friday, December 15, 2017 at Sunny Lane Cemetery in Del City, Oklahoma. The family request that donations be made to Crosswired Cowboy Church or the Disabled American Veterans.

Gilbert Warren Woodie, known as &#8216;Woodie&#8221;, age 97, of Grove, went home to be with his Lord on Sunday, December 10, 2017 in the Veterans Hospital in Claremore, OK after battling cancer. Woodie was born in Warrenville, North Carolina... View Obituary & Service Information

The family of Gilbert W. "Woodie" Woodie created this Life Tributes page to make it easy to share your memories.

Send flowers to the Woodie family.