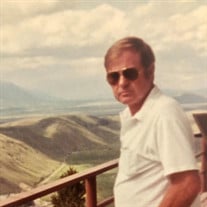 Gene M. Wylie, age 81, of Grove, OK passed away on Sunday, December 13, 2020 in Joplin, MO. Gene was born on July 4, 1939 to Thomas and Ouida (Bevers) Wylie in Ropesville, TX and attended school in Midland, Texas. At the age of 16, Gene began framing houses and construction became his passion and life’s work. He formed Wylie Construction and built beautiful custom homes all over the United States, including: Texas, Wyoming, California and many other states. He served on several construction and zoning boards and was Vice President of the Homebuilders Association while in Wyoming. On November 5, 1960, Gene married the love of his life, Sharon Powell, in Big Spring, TX. Together, they shared a beautiful, long lasting marriage of over 60 years. Gene finally retired in 1999 in Grove Oklahoma and worked at Patricia Island Golf Course as superintendent until his health declined. During his retirement, he loved fishing off the Grand Lake O’ the Cherokees, watching his favorite western movies, reading the bible and spending time with his beloved wife Sharon. Gene loved his family dearly and every year had a family celebration on his birthday, which always included a great barbecue and quality time with his family. His devotion and reverence to God was an important part of Gene’s life, he shared love for the Lord and the baptist church. Gene was an extremely accomplished, loving father, grandfather and great-grandfather. His dedication to his career and family shined in every aspect of his life. When Gene spoke, his words were humble, yet his thoughtfulness was deep and intricate. A man that truly cherished his every moment of life. He was loved by all and is truly missed by his family. He was preceded in death by his parents and 3 brothers. Left to cherish Gene’s memory, wife, Sharon Wylie; sons, Grady Wylie of Grove, and Donald Wylie of Gunter, TX; brothers: David Wylie (Patty) of Collinsville, OK, Grover Wylie and Henry Wylie, both of Memphis, TN, sister, Jeannette Hamlin of Catoosa, OK, 2 grandchildren Josh Wylie of Portland, Or, Jenny Taveau (Chris) Oklahoma City, OK, and 2 great grandchildren. Memorial services are planned for a later date.

The family of Gene M. Wylie created this Life Tributes page to make it easy to share your memories.

Send flowers to the Wylie family.