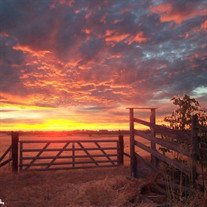 Frank E. Close, Sr. age 89, former Ottawa County Commissioner, passed away Monday, October 16, 2017 at Grove Nursing Center. Frank was born on November 8, 1927 to Charles and Gladys (Hudson) Close in Graham, KS, one of nine siblings. As a child, Frank’s parents were migrant farmers and moved to where ever they could find work, so he attended many different schools throughout Kansas and even Colorado. On March 19, 1973, Frank married the love of his life, Edna Upchurch, in Miami, OK and the couple made their home in Fairland. Always a hard worker, Frank held several different jobs, including 8 years as Ottawa County Commissioner, but his heart was in farming and there was nothing he enjoyed more than being on his tractor and working with his livestock, although, deer and coon hunting with his son were a close second. Frank was preceded in death by his parents, 2 brothers and 4 sisters. Left to carry on Frank’s legacy: wife, Edna Close of Grove, son Frank E. Close, Jr. and wife, Megan, and granddaughters, Gentry and Bailey Close all of Grove; step-daughter, Tomie Burris of Kansas City, MO; brother, Darrell Close and sister, Beverly Church and many nieces and nephews. An informal gathering for family and friends will be held at 1pm Saturday, October 21, 2017 at Nichols Funeral & Cremation Services, Grove.

The family of Frank E. Close Sr created this Life Tributes page to make it easy to share your memories.

Send flowers to the Close family.