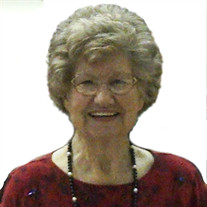 Ethelda was born to Bill & Ruby Phillips on September 12, 1928 in Cordell, OK, and lived in Hobart, OK. Her and older brother, Bob, were energetic children who would hang out under their mother’s burger shack, or tap dance for ladies luncheons. They would travel by train to visit their Grandparents, and directed by the neighbors to hurry on up the street to their house. She moved with her family for a short stint in the first grade in Oklahoma City, and then on to Tulsa to make it home for school, family business, friends, and sports. As a teen, her Mother suggested she ask that nice young man, Bill Cline, to a dance – and when he said he didn’t know how to dance, she said, “OK! I’ll ask someone else.” He learned how& became a great dancer! They ice skated at Mohawk Park, and she enjoyed watching him play hockey or letting him put peanut shells in the hood of her large coat while watching hockey at the fairgrounds pavilion. They were married in 1950, moved to San Diego & Hawaii while in the U.S. Navy. Upon returning to Tula, Ethelda was vice president in the family business, Dainty Maid Sandwich Co.; and Bill joined the Tulsa Fire Department. Their family grew with two children – Daryl and Debbie, and they devoted their time to God, family, Memorial Park Christian Church, wrestling, baseball, cub & girl scouts.As a super mom/home maker she was known for her pecan, coconut & banana cream pies! She loved picking and canning pickles, okra, tomatoes, &strawberries. Her and Bill made a great team, and loved to entertain all holidays and life celebrations. Ethelda took on her realtors license to replace youth activities, and worked with Greene & Andress Realtors in Tulsa; and added her broker’s license upon their move to the Grand Lake area in 1983, until the late 90’s. Both she and Bill had joined and became actively involved in lake activities, and joined Lake Center Baptist Church Sunday School, Choir, Visitation, and Building ministries locally & in other states. Semi-retired, they enjoyed their adult children & families, grandchildren, fellowship and travelling with friends. Bill passed suddenly in October, 1993, and Ethelda immersed herself in outdoor hobbies like mowing, bird watching and gardening. She never slowed down for a moment, and enjoyed life to the fullest until Alzheimer’s disease made life more of a challenge. We will remember her always as kind, loving, spunky spirit, and her phrases: “Day-late Dollar-short; Who’s on first; or Is that all she wrote?”As well as her hugs, and hand kisses to show her love & appreciation to all, when words became difficult. Ethelda was preceded in death by parents Bill Phillips, Ruby Wilson Phillips Rackleff; Brother, Bob Phillips; and is survived by Son, Daryl Cline and Wife, Yvette Cline of Broken Arrow, OK; Daughter, Debbie Cline-Smith, and Husband, Danny Smith, Monkey Island, OK; and 4 Grandchildren, 4 Great Grandchildren. She passed peaceably at Grandwood Memory Care, Grove, OK on Thursday, October 31, 2019 at 4:26 p.m. Visitation on Monday, November 4, 2019at Nichols-Stephens Funeral Home in Grove 5 – 7 p.m.; U.S. Highway 59, Grove, OK. (918-786-6761) Funeral Services will be Tuesday, November 5, 2019, 10 a.m. at Lake Center Baptist Church, 29020 S. Highway 125, Monkey Island, OK, officiated by Bro. Kim Hays, Pastor Perry First Baptist. Internment/Graveside at Memorial Park Cemetery, 5111 South Memorial Drive, Tulsa, OK, Chapel View South (North/East gate entrance), Section 21, Plot 151A; for Tulsa area family & friends. [There will not be an auto processional.] Arrangements under the direction of Nichols-Stephens Funeral Home, Grove. Flowers are appreciated; if prefer, memoriams may be given to Lake Center Baptist Church.

Ethelda was born to Bill & Ruby Phillips on September 12, 1928 in Cordell, OK, and lived in Hobart, OK. Her and older brother, Bob, were energetic children who would hang out under their mother&#8217;s burger shack, or tap dance for ladies... View Obituary & Service Information

The family of Ethelda A. Cline created this Life Tributes page to make it easy to share your memories.

Send flowers to the Cline family.