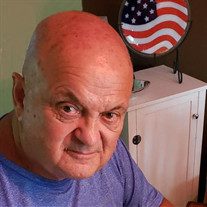 Donald “Don” Joseph Chalupnik of Grove, Oklahoma, was a loving husband, father, grandfather, brother, uncle and friend. He passed unexpectedly on June 30, 2021. Don’s parents, Rosalia and Anton Chalupnik, welcomed him into their large family on July 16, 1942, in Graceville, MN, as he was the ninth of twelve children. Don leaves his wife of 54 years, Carole (Krause) Chalupnik and his four children of which he was so proud: John Chalupnik, Scott Chalupnik, Jennifer Goodrich and Jill Pease. He was also a loving father-in-law to their spouses and a doting grandfather of six. After high school, Don enlisted in the Air Force where he achieved the rank of Senior Master Sergeant. He was a Vietnam Veteran and received the Bronze Star Medal. He retired after 21 years of service to his country. After his military retirement, he started his own painting business. Don did not know a stranger and was always first to volunteer and offer assistance. While living in Omaha, NE, he volunteered for years with Boy Scouts of America, earned his Wood Badge for leadership and was able to see both sons achieve Eagle Scout. After moving to Oklahoma, he was a volunteer firefighter with the Monkey Island Fire Department, an active member of The American Legion Post 178 Ritual Team and a volunteer for the Disabled American Veterans. The funeral service will be held on July 16 at 11:00 am at St. Elizabeth’s Catholic Church in Grove. A luncheon will follow, provided by the Women’s Auxiliary at 56298 E 295 Rd, Afton, OK 74331 (across the street from the New Monkey Island Fire Department). In lieu of flowers, the family has requested memorials be directed to the American Legion Grove Oklahoma Post 178, P.O. Box 450203, Grove, OK 74345, Attention: Ritual Team.

The family of Donald J. Chalupnik created this Life Tributes page to make it easy to share your memories.

Donald “Don” Joseph Chalupnik of Grove, Oklahoma, was a loving...

Send flowers to the Chalupnik family.