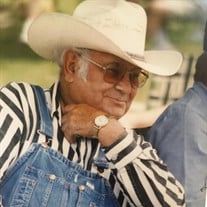 Derrell "Runt" Stogsdill died at his home peacefully surrounded by his family on Aug. 11 at the age of 77. Known as “Runt” all of his life, he was born on March 13, 1940, to Van Dora and Claud (Bodie) Stogsdill in rural Delaware County in the Whitewater area. He attended Butler and Whitewater schools as a child and later Grove High School. Much of his early years, he spent as a pipepliner working on jobs all over the United States with family members, Percy, Morris, Dean, Gary, Windy and Doug Stogsdill. He opened his own bulldozer and excavation business in 1972 called “Derrell Stogsdill and Son.” Although the name changed throughout the years, for over 40 years many of his large dump trucks and dozers were seen in and around Grove, including Patricia Island and Har-Ber Village and most of the Grand Lake area. In his later years, he became interested in genealogy and loved meeting distant relatives and learning the history surrounding his family. He was very proud that his first great-granddaughter and great-grandson were named after his great-grandparents, Benjamin and Mahala Stogsdill, who moved from Kentucky to Delaware County in the 1880s. He was known for his sense of humor, practical jokes, witty remarks and everyone he met had a nickname. He loved music – bluegrass, country – and especially fiddle music. He brought home his first jukebox in the early 1970s. Hank Sr, Merle, Buck and Johnny were there for every fish fry and when family and friends would get-together at his house or on the creek. Runt helped establish and organize the Grove Rodeo organization and for a decade was president. He and his wife, Debra, enjoyed participating in trail rides, where Runt would drive a horse-drawn wagon. Throughout his lifetime, he had some beloved pets and to him, it was an honor when his oldest granddaughter was named after his favorite horse, Brandy. After a tractor accident in 2012, Spanky his dog never left his side and was a constant companion. He loved children, especially babies. One of the events held in Grove he was pleased to help with was Jakes Day, which saw almost 1,000 children descend upon his and Debra’s property every May near the Whitewater area of Delaware County. He loved to hear the laughter of children learning to fish, gun safety, archery, horseback riding and other outdoor activities. He married (Carolyn) Sue Harless Stogsdill in 1961 and to this marriage was born three children, Sheila, Debi and Rick. He later married Debra Heffleman Hilton Stogsdill in 1979 and together they raised her two children, Angie and Scott. A tractor accident in 2012-left Runt confined to a bed. He had many faithful friends that visited him, encouraged him physically and spiritually. One friend Sam Morgan always took the time to come out and spend a couple of hours where they watched many westerns but they also talked about Christ and this is where he acknowledged to Sam his relationship with Christ and knew where he would spend eternity. Runt and Debra were longtime members of Butler Baptist Church and in recent years belonged to Crosswired Cowboy Church. His mother and father, Van Dora and Claud Stogsdill, son-in-law, Don Olive, two infant grandsons, Donovan Burkett and Chance Hilton, and a nephew, Greg Williams, preceded him in death. He is survived by his wife, Debra and children, Sheila Stogsdill (Kaye), Debi Olive (Pooch), Rick (Pete)and his wife Joy Stogsdill, Angie Dixon (Goofy), Scott (Boy) and his wife Carol (June) Hilton, Jesse (Sunny) Layman and Skyan Russell (Mean Machine). Grandchildren: Brandi Williams and her husband Tim, Mandi Boswell, Vanessa McGuire and her husband Jerrod, Derek Dixon and his wife Casey, Blake Dixon, Coby Hilton, Dalton Hilton and Katie Hilton and nine great-grandchildren, Mahala Boswell, Benjamin McCall, Carter Boswell, Akira Dixon, Erik McGuire, Maddoc Dixon, Elizabeth Boswell, Reed McGuire, Idony Dixon, Hunter and Avry Laymon, Dayton Brown and Kloie Bodine. Also, surviving is his sister, Phyllis (Catty)and her husband Rowayne Williams, brothers Herrell (Windy) Stogsdill and wife Charlotte, Ferrell (Doug) Stogsdill and wife Jessica, many nieces and nephews and their children. The family would like to thank Good Shepherd Hospice and Crosswired Cowboy Church for the wonderful care and support during Runt’s final days.

The family of Derrell "Runt" Stogsdill created this Life Tributes page to make it easy to share your memories.

Send flowers to the Stogsdill family.