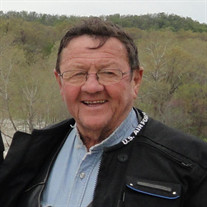 Dennis R. “Denny” Martin, age 69, of Grove, OK passed away on Thursday, September 15, 2016 at Integris Grove Hospital after battling cancer for almost 2 years. Denny was born on April 12, 1947 to James and Ruby (Powers) Martin in Anderson, MO. He grew up in Grove and graduated from Grove High School in 1965. Following graduation, Denny enlisted in U.S. Air Force and proudly served his country for 4 years during Vietnam. In 1968 he married Judy Kernes in Wichita, KS and the couple made their home in Grove. They were married for 37 years and from that union came 2 children, Todd and Wendy. Denny’s life’s work was farming & cattle and his passion was law enforcement. He served as a Deputy for the Delaware County Sheriff’s Dept for 17 years until retiring in 2012. One of Denny’s proudest accomplishments was his Black Belt in Mong-Su-Dom-Tai. He enjoyed spending time with his family and riding his motorcycle. He attended Calvary Cowboy Church in Southwest City, MO. Denny was a people person and greeted everyone with a big smile, and loved making other people smile. He only met a stranger once, and from then on you were a friend. Always quick to lend a helping hand, he was a kind, considerate man and he will be missed by all who knew him. The world is a better place because Denny Martin was in it. He was preceded in death by: his father, and 3 infant siblings. Those left to carry on Denny’s legacy: son Todd Martin and wife, Sandra; daughter Wendy Mauldin and husband, Clay; one brother Jimmie “Weed” Martin and 5 grandchildren: Dylan, Riley and Logan Mauldin and Payton and Paige Martin, all of Grove, OK. Gathering for friends and family will be held from 5 to 7pm Monday, September 16 at Nichols Funeral Chapel. Memorial services will be at 11am Tuesday, September 20, 2016 at First Baptist Church in Grove, Ok. Pastor Bob Easter to officiate. Donations may be made to Calvary Cowboy Church 915 N. Main St., Southwest City, MO 64865. Arrangements entrusted to Nichols Funeral & Cremation Services, Grove, OK.

The family of Dennis "Denny" R. Martin created this Life Tributes page to make it easy to share your memories.

Send flowers to the Martin family.