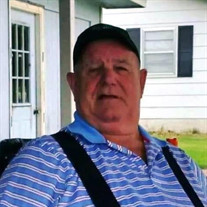 David Derrell Jackson went to heaven on Fri, June 5, 2020. He was a 75-year-old lifelong Zena resident and proud Vietnam veteran. Born on Aug. 21, 1944 in Vallejo, CA to Andrew David “AD” & Rachel Thelma Messimore Jackson. He married the love of his life Roberta Tanner on Nov. 20, 1967. He was preceded in death by both his parents, his wife and his eldest son John “Bo” Jackson. They are all probably sitting around the table drinking coffee and swapping stories. David was a loving, caring son, brother, father, uncle, cousin, and grandfather. His son Andrew Leonard “Butch” Jackson and daughter Karen “Peaches” Hicks Jackson along with 3 grand-daughters: Felicia, Emma, and Gracie Jackson; 3 great grand-sons: Brenden, Brandon, and Xander Bo Overton will all truly his miss his hearty laugh & big bear hugs. He has numerous honorary sons including Rick Welch, Shane Lasley, Roger Tanner and Chad Nutt. He was preceded in death by brother Andrew Jackson, sister Anita Reid, and special family friend Charlotte Jackson Bowden. He is survived by brothers: Alvin Jackson and wife Mary Ellen, Mike Jackson and wife Linda, Jodie Jackson and wife Marie, Bruce Jackson and wife Debbie; sisters Violet Pettegrew and husband Chuck, and Deb Jackson. Numerous cousins, nieces and nephews and special recognition to his only living aunt Lois Jackson. Pallbearers will be honorary sons and nephews. A graveside service will be held at Zena Cemetery at 11 am on Wed, June 10, 2020. There will be no formal visitation, but his body will be held at Nichols-Stephens funeral home for personal visitations. Mike Earp will be officiating. A dinner will be held after the service at the Zena Community center. Chicken will be provided. Side dishes, desserts, and drinks would be appreciated. He would like donations to be made to the “DAV” Disabled American Veterans.

The family of David Jackson created this Life Tributes page to make it easy to share your memories.

Send flowers to the Jackson family.