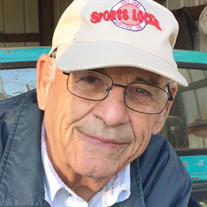 Charles “C.E.” “Coach” Hampton, age 76, longtime resident of Grove and loyal Ridgerunner, passed away peacefully on Saturday, November 18, 2017 at his home. Charles was born on February 1, 1941 to Dale and Rozella Hampton in Grove, OK where he grew up and graduated from Grove High School in 1959. Attending Fort Scott Community College, Northeastern State University and Wichita State University he received Bachelors and Master’s Degrees in Education. While attending Fort Scott, Charles met the love of his life, Janet Metcalf, and the couple married on June 16, 1962. Making their initial home together in Kansas, Charles coached football and junior college for 11 years culminating at Coffeyville Community College on a 1976 national championship team. The family returned to Grove where Charles would teach and coach for 20 more years. Charles’ passion was football. He loved the game from the time anyone can remember and he would devote over 30 years professionally teaching and coaching the game he loved. His life-long work impacted countless lives. He was a positive role model, a tremendous coach to the players, a mentor to many students, a great co-worker, and friend. Coach Hampton had the unique ability to make each student feel special and was known affectionately for nicknames given to his students and players many of whom he still called them by decades later. Charles had an incredible memory and could recall and retell stories people loved to hear decades later. Behind his quiet voice and thoughtful demeanor, there were years of experience and a heart of gold that touched many lives. He contributed to the community of Grove in many ways. He was a lifelong member of the First United Methodist Church and Choir, the Masonic Lodge, a volunteer at Integris Grove Hospital and as always, a loyal Ridgerunner fan. Although, C.E. retired from Grove Public Schools in 1996, it was not the end of his career. In 2004, he accepted a position coaching football in West Albany, OR, where both of his daughters resided. Coach “Okie” Hampton had great success with the West Albany Bulldogs, winning back to back championships in 2006-2007, and continuing his legacy of mentoring and inspiring young football players and forming many lasting relationships. Charles was preceded in death by his parents and one brother, Don Hampton. Charles is survived by his loving wife, Janet Hampton of the home; their children: Shane Hampton and wife, Sherry of St Charles, IL, Seana Searcy and husband, Tom of Portland, OR, Shana Hains and husband, Chris of Corvallis, OR; siblings: Dale Hampton, Jane Gulley and Esther Reed; grandchildren, Aubrey Zagar, Derek Hampton and James Hampton, many loving nieces, nephews and cousins. A gathering for family and friends will be from 5-7pm Tuesday, November 21 at Nichols Funeral Service. A Celebration of life will be at 2pm Wednesday, November 22, 2017 at the First United Methodists Church. Pastor’s Gary Bishop and Randy Hamill to officiate. In lieu of flowers donations may be made to:Grove YMCA c/o Nichols Funeral Service 9611 U.S. Hwy 59 N. Grove, OK

The family of Charles E. “Coach” Hampton created this Life Tributes page to make it easy to share your memories.

Send flowers to the Hampton family.