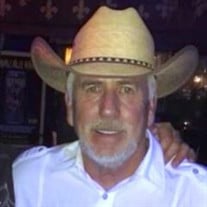 Charles Wesley “Chuck” Farran of Miami, Oklahoma, passed away in the loving presence of his family on March 22, 2021. He was seventy years old. Chuck was born on March 5, 1951, in Parsons, Kansas, the youngest of five children born to Charles Wesley “C.W.” and Edith (Guy) Farran. He grew up in Parsons, where he attended school and graduated from Parsons High. On November 7, 1970, Chuck married Sonya Kay (Anderson Good) and they remained married until her death in 2016. Chuck enjoyed life’s celebrations. He was a lifelong fan of music, both a musician and an exceptional dancer, a faithful friend to many and beloved for his wit and humor. He owned and operated Farran Concrete in Parsons and Miami until his retirement. He was preceded in death by his parents, his wife, Sonya, one brother, Richard Farran and one sister, Janet (Farran) Cloke. Left to cherish Chuck’s memory, children: Mandy Loree Farran O’Banion (Shannon O’Banion) of Grove, OK, Leslie Fay Farran of Miami, OK and Logan Thomas Farran of Miami, OK; six grandchildren: Hali Smith, Sydney Smith, Olivia Paige Painter, Luke Painter and Kenzie Farran; two sisters, Charlotte Merrill of Parsons and Judy Corey of Kansas City. Chuck had a great capacity to love and his death is deeply mourned by numerous in-laws, nieces, nephews, extended family and a host of friends who loved him and considered him family. A Celebration of Chuck’s Life will be held at 4pm on June 19, 2021 at the O’Banion Barn. Arrangements entrusted to Nichols-Stephens Funeral & Cremation Services.

Charles Wesley &#8220;Chuck&#8221; Farran of Miami, Oklahoma, passed away in the loving presence of his family on March 22, 2021. He was seventy years old. Chuck was born on March 5, 1951, in Parsons, Kansas, the youngest of five children... View Obituary & Service Information

The family of Charles "Chuck"' W. Farran created this Life Tributes page to make it easy to share your memories.

Send flowers to the Farran family.