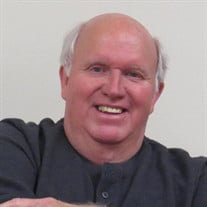 Carl “Ed” Jones, age 77, of Wyandotte, OK passed away unexpectedly on Tuesday, May 26, 2020. Ed was born on April 27, 1943 to Carl and Dorothy (Kitts) Jones in Stella, MO.  He grew up in Joplin and graduated from Joplin High School in 1961. After graduation Ed attended community college. On April 22, 1965, Ed married the love of his life, Kathleen Roberts in Joplin, MO.  Ed began working as a Brakeman for the Missouri Pacific Railroad, later advancing into Management. He was then transferred throughout the U.S. and retired after 25 years. Ed was a multitalented man, employeed as an Auctioneer in Texas and most recently as a Realtor for Remax Grand Lake, for the last 20 years. Spending time on his 40 acre farm, mowing, tending to the animals and being outdoors are some of the activities that Ed enjoyed. What brought him the most joy, was making people laugh and bringing smiles to faces.   He was a jovial, larger than life man that never met a stranger.  His clever, quick wit and great sense of humor will be dearly missed! Ed was preceded in death by his parents and one brother, Rick Jones. Left to carry on his legacy, wife, Kathleen Jones, son, Mardy Jones (Audrey) of Little Rock, AR, daughter, Kelley Jones of Nairobi, Kenya, sister, Tena Jones of Vinita, OK, brother Thad Jones (Julie) of Ft Lauderdale, FL, grandchildren Mardis Jones and Jesse Jones & special friend, Jennifer Landers and many nieces and nephews. Memorial services will be at 11am Saturday,June 13, 20220 at Nichols-Stephens Funeral Chapel.  Donations may be made to Second Chance Pet Rescue in Ed’s memory. Arrangements entrusted to Nichols-Stephens Funeral & Cremation Services. Online condolences may be made at ‪www.nicholsfuneralandcremation.com‬.

The family of Carl "Ed" Jones created this Life Tributes page to make it easy to share your memories.

Send flowers to the Jones family.