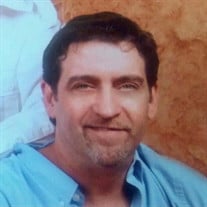 Bryan K. Bradford, age 53, of Grove, Ok passed away on Tuesday, November 24, 2020 in Joplin, MO after a short illness.   Bryan was born on April 2, 1968 to Jim and Earlene (Waldroop) Bradford in Siloam Springs, AR.  As a child, in 1977, Bryan's family moved to Grove, where he played football and wrestled. He graduated from Grove High School, Class of 1986.  After high school, Bryan earned an Associates Degree from Northeastern A & M College and then attended Northeastern State University in Tahlequah. Bryan later worked at, what was formerly, Precision Machine as a machinist for 25 years.   Bryan loved the outdoors and was an avid deer hunter and enjoyed fishing and traveling. He had a kind, outgoing personality, a great sense of humor and a smile that was contagious. He will be missed by many. Even in his passing, Bryan continued to help people by being an organ donor. His donation helped up to 50 recipients. He is preceded in death by his grandparents.  Left to cherish his memory, parents, Jim and Earlene Bradford, brother, Jimmy Bradford and nephew, Garrett Bradford, all of Grove.   Visitation will be from 5-7pm Monday, November 30, at Nichols-Stephens Funeral Service.  Funeral services will be at 1pm Tuesday, December 1, 2020 at Nichols-Stephens Funeral Chapel.  Bryan will be laid to rest in Bell Cemetery in Watts, OK.   As many of his friends know Bryan loved his dogs therefore the family requests all donations be made to Second Chance Pet Rescue, at https://www.secondchancepetsponsors.org/ or mailed to 64301 E. 290 Rd Grove, OK 74344.   Arrangements entrusted to Nichols-Stephens Funeral & Cremation Services.  Online condolences may be made at www.nicholsfuneralandcremation.com.

The family of Bryan K. Bradford created this Life Tributes page to make it easy to share your memories.

Send flowers to the Bradford family.