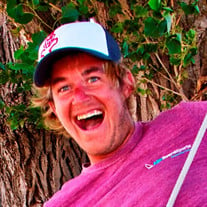 Brendon B. Quinn, age 39, resident of Everywhere, Anywhere, Nowhere (from his blog), passed away unexpectedly on April 19th, 2022 in Houston, Texas. Brendon was born on April 4, 1983, in San Jose, California to Michael and Peri Ann (Walker) Quinn. He graduated from Beaverton High School in Beaverton, Oregon. In high school, he took advanced placement level courses, played trumpet in the Marching Band, was involved in Peer Court and joined the tennis team. He graduated with a letter in tennis and a scholarship award for science from Intel Corp. He started windsurfing when he was 12 while he was going to school in Beaverton. He traveled to California in the summers and learned and taught sailing at Shoreline in Mountain View, California. As a young adult, he took a leap of faith quit his job, leaving his home to live on the road. Every stop, every different sailing spot and every unique person he met made it all worthwhile. He became a wind surfing instructor after starting out as a cook around 2008 and worked his way up to windsurfing instructor and was employed by ABK BoardSports, which is the oldest professionally run windsurfing school in the United States, established in 1982. He was living the dream, traveling all over the world, making many friends and memories. Not only did he enjoy his profession immensely, but he also was an amazing photographer, capturing countless remembrances in the photos he published online. He authored numerous articles for magazines, including Windsport Magazine. He previously authored a blog ‘Windsurfing Gypsy’ which includes many of his interesting narratives and photos from around the world. Brendon was a ‘free spirit’ by every definition of the phrase; very kind-hearted, thoughtful and caring. His “homelessness” was his home. He loved his family and always made sure to visit as often as possible, one time cutting his long hair (something he said he would never do) to surprise his family at Christmas. He mentored many students during his lifetime. He was loved by countless students and friends across the world and will be greatly missed. He was preceded in death by his paternal grandfather James Quinn, Jr. Left to cherish his memory, his mother Peri Taylor and husband, Kevin of Wyandotte and father, Michael Quinn and wife Patricia of California; his half-brother Timothy Quinn; maternal grandparents Thomas and Lisa Walker of Portland, Oregon, paternal grandmother Carolyn Quinn; dear friends and Houston family, Jon and Holly Casley and mentor Andy Brandt, as well as extended family and his friends across the world. Memorial Services will be held at 11:00 am on Monday, May 23 at Nichols-Stephens Funeral Chapel, Grove, Oklahoma.

Brendon B. Quinn, age 39, resident of Everywhere, Anywhere, Nowhere (from his blog), passed away unexpectedly on April 19th, 2022 in Houston, Texas. Brendon was born on April 4, 1983, in San Jose, California to Michael and Peri Ann (Walker)... View Obituary & Service Information

The family of Brendon B. Quinn created this Life Tributes page to make it easy to share your memories.